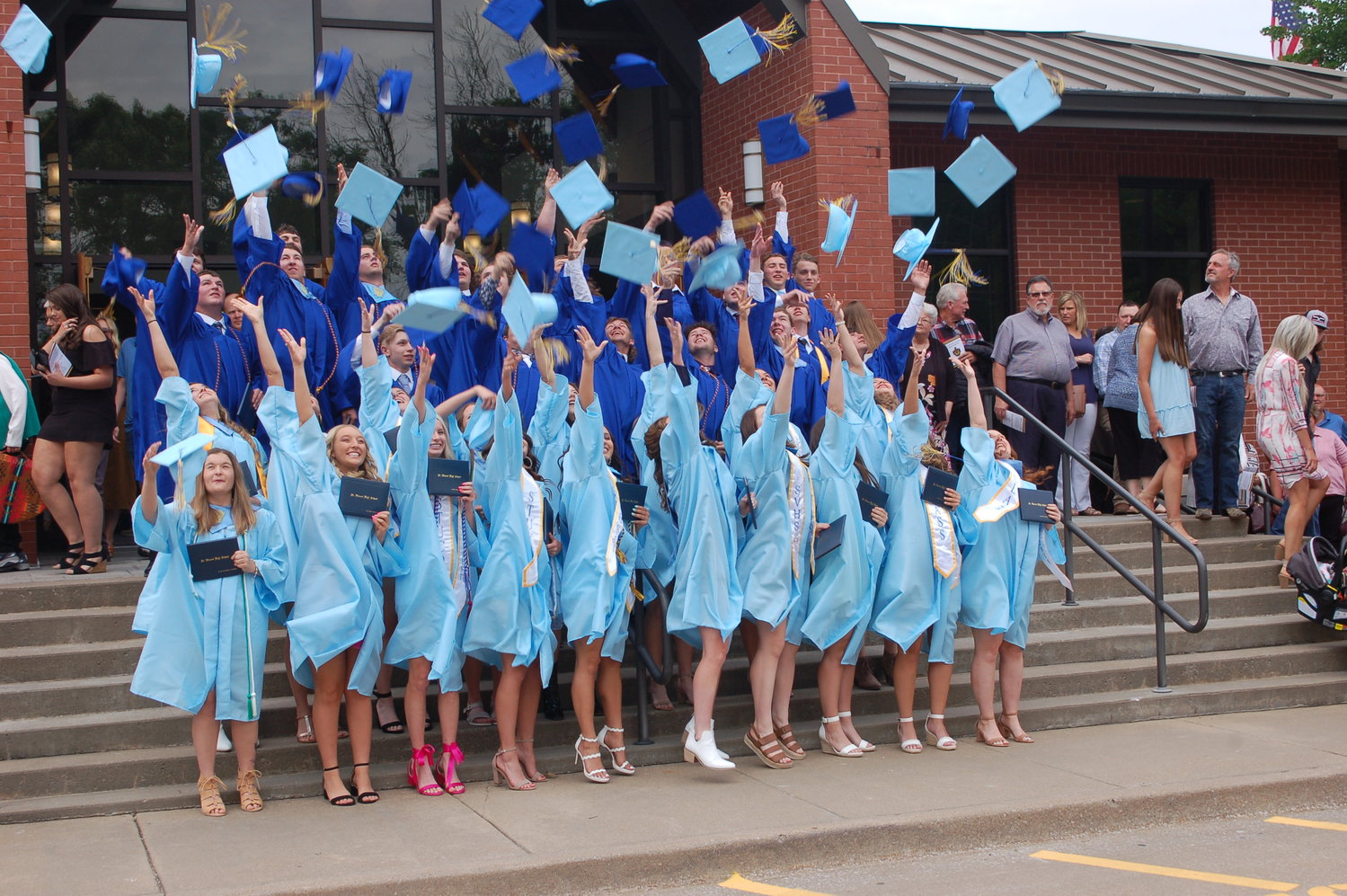 Diplomas were conferred to 39 graduates of St. Vincent de Paul High School Sunday, May 22, in an afternoon commencement ceremony held in the parish sanctuary.

“We made it to the end of the chapter telling the story of our childhood, and remember, none of that would have been possible without the people we love,” Cates said.

Family, friends, coaches, teachers and God played a role in the success of each of the 2022 graduates, Cates said.

“Never forget to thank yourselves through all of the roadblocks we faced, as a united group or personal tribulations, we crossed the finish line, and to me, that is surreal.”

Cates recalls how she often “feared for her life” when faced with challenges in life, from doing little circles in her driveway on a bike with training wheels, to eventually getting to the point of driving a vehicle in little circles around a little town in her little car.

“Some of us will continue to flourish in this community in which our families planted roots,” Cates said. “Others will march to the beat of our own drum and plow a new path and the rest have no idea where our dreams and inspirations will carry us. In each scenario, whichever we may choose, we’ll be starting the rest of our lives.”

“After all this time, you finally made it,” said Class of 2022 salutatorian Lexi Bohnert. “What felt like an eternity of doing assignments and going to class has passed in the blink of an eye. I want to thank all of the important people who have helped us develop into the young students and adults that we are today. Thank you to our families who are always there to guide and support us to be good students and good people. Through the good and the bad, they were always there to keep us motivated. Thank you to our teachers for dedicating countless hours helping us learn themselves. Lastly, thank you to our friends who helped us get through it and make the journey fun.

Commencement for the St. Vincent class of 2022 was “the first milestone of many,” according to Bohnert.

“I have no doubt that we’re all destined for success,” Bohnert said. “Graduation marks an open door to all of our future accomplishments. We have taken that place, and now we can take our first steps forward.”

Roger Steinbecker, a SVHS graduate, provided the address to this year’s graduates.

“My goal is that each of your lives will become special,” he said. “Special is the theme.”

“I ask you to envision your life as a highway,” Steinbecker said. “This afternoon, you’re ending a 12-year journey down a narrow, two-lane road. You’re about to enter a multi-lane, fast moving interstate highway. These two roads are converging right now, right here…Your past achievements are somewhat faded already. That graduation road is morphing into the commencement road where your future destinations are somewhat blurred.”

Special, Steinbecker noted, is defined as “being in some ways ways superior, unique, set apart.”

He told the graduates they aren’t the chosen few in 2022.

To be special, Steinbecker said, is something that must be earned over time.

“I believe that you and we have to earn the term special, and we do it over a lifetime,” he said. “It depends, also, on who defines it.”

Achieving a diploma is a journey in life, and the traveling continues, according to Steinbecker.

“I want you to get on that interstate highway with your eyes wide open and even with a slice of humility,” he said.

Steinbecker wanted the graduates to focus on three illusory billboards on this interstate.

“You find your own special,” he said. “You set your expectations, and hopefully it’s good advice, but you don’t allow others to set your goals.”

“Work hard, love others, be yourself,” he said. “Regardless of where the interstate takes you or what your job is, be the best you can be.”

The final billboard message was about not losing sight of those who helped you get to commencement.

In his closing remarks Steinbecker shared a few choice words he recently found on Facebook.

“Nobody’s perfect. We make mistakes, we say wrong things, we do wrong things, we fall, we get up, we learn, we grow, we move on, we live…class of 2022, start your engines, it’s going to be a great ride!” he said.

The Rev. Joe Geders gave an opening prayer and also provided a closing prayer for those graduating Sunday.

“May God give you the grace to make wise choices, and to be faithful to your commitments,” Geders said.

“It is very exciting,” said Lacci Gibbar. “It’s like the end of one chapter of our life and going into the next. (It’s) a very big moment and I think we’re all really excited.”

For Gibbar and her classmates, receiving the diploma and flipping the tassels on their caps was a “surreal” moment. When the commencement exercises concluded, waiting to toss her cap was much more sentimental.

“That was very emotional, I actually almost started crying,” she said. “It was really cool, the last thing we all did together.”

Gibbar plans to attend the University of Missouri later this fall. She is undecided on a major.

“It’s very important,” said Jett Reitzel. “I’ve been trying to get there for the past 13 years and we’re finally here.”

“It was definitely different, it was more joking, little stuff like that,” Reitzel said.

Those speaking at the ceremony provided insightful messages, according to Reitzel.

“It makes you think how you’re going to miss your class, how we’re just out into the world now.”

Toward the end of Sunday’s ceremony, graduate Ethan Leible was presented with the St. Vincent de Paul Award, which is given to a senior who best displays the virtues and traits of St. Vincent during his or her time while enrolled at school.