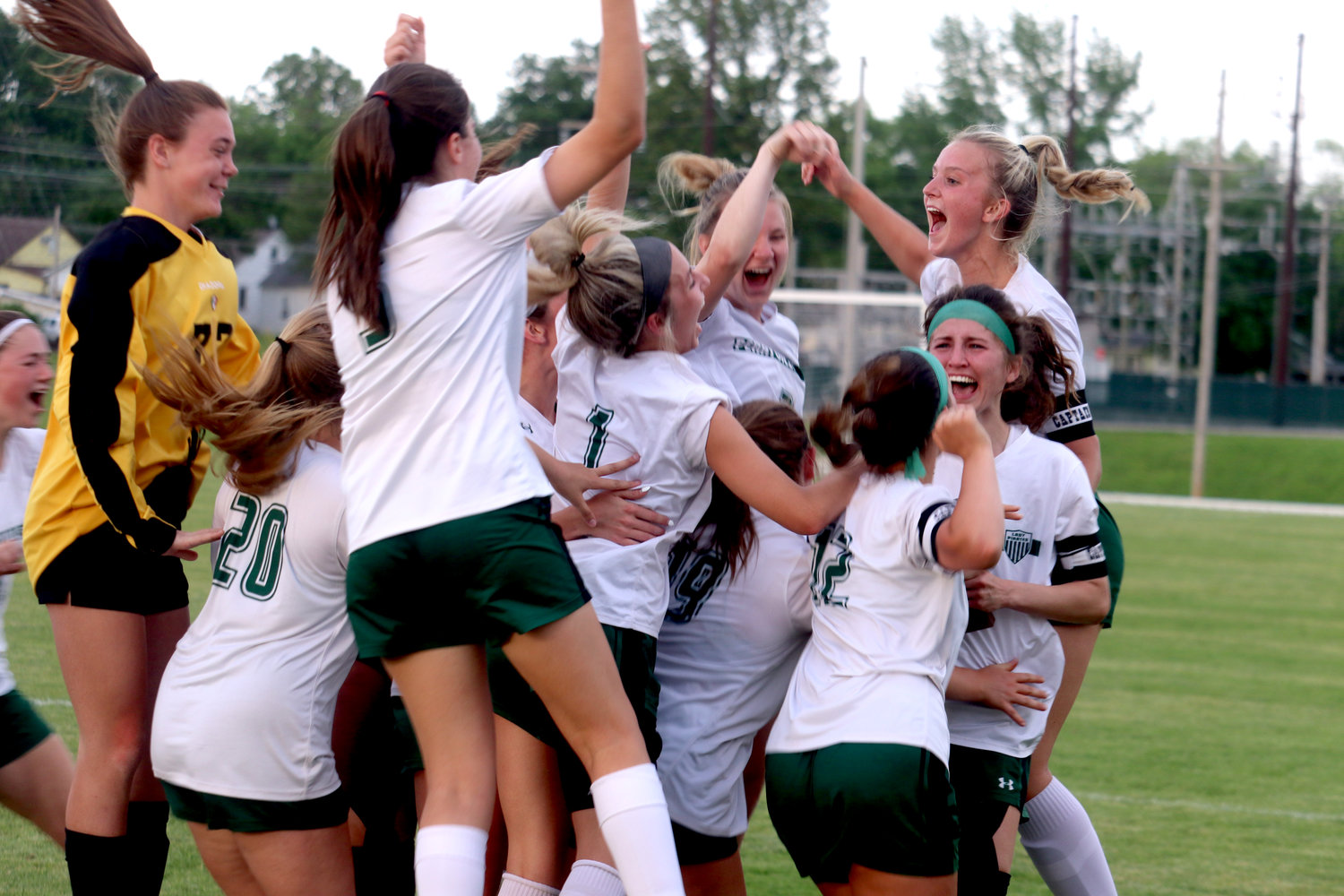 Perryville girls soccer coach Jerry Fulton felt like his team had a wake-up call at one point this season.
Perryville started the year 12-0-1 and then fell to conference foes Windsor and rival St. Vincent at the end of April in consecutive games to essentially end their bid for a conference title. Fulton believed that the hiccup helped get his team where it is today.
Where is that? Another district championship.
Second seed Perryville shut out top seed Fredericktown 2-0 in the Class 2, District 1 championship game Tuesday at The Bank of Missouri Soccer Complex. The championship is the program’s second straight.
“They knew they could do it, but it took a little bit of convincing to get them there,” Fulton said. “We told them all year that this could happen. If it hadn’t been for a stumble there during the season, I thought this team could go undefeated. I thought it served as a wake-up call for us. Sometimes that’s what a team needs. I’ll trade a conference title for a district title any day.”
A focal point of the Pirates’ game plan was to shut down Fredericktown senior Alivia Buxton, a Mississippi State soccer commit. She came into the game with 66 goals on the year and Fulton felt that if his team could stop her they would have a good chance of winning.
“We weren’t going to let (Buxton) beat us,” Fulton said. “Usually when they played us, they played her back and they were trying to come up. When we started the game, they played her up which gave us the back open, which is how we got the two goals. In the second half, Kyla’s (Schnurbusch) job was, ‘If she went to the bathroom, you go with her,’ and she did an excellent job at that. She has 66 goals on the season, but we’ve played them for 195 minutes and she’s never scored on us. That just goes to show the heart of this team.”
With Schnurbusch occupied with slowing down Buxton, someone else would have to handle the scoring punch. That someone happened to be Carlie Holdman.
Holdman wasted little time getting the Pirates on the board, scoring just five minutes into the contest. She would find the back of the net again in the 27th minute to put Perryville up 2-0. Jewel Riney and Alyssa King provided the assists.
“When Carlie’s on she’s as good as anybody,” Fulton said. “We knew that if we took Kyla, who is our leading goal scorer, off the table and give her a job somebody else had to step up, and Carlie did.”
Fulton liked the fact that his team jumped out to a lead early.
“I couldn’t have scripted it any better,” he said. “To get one that early was great.”
Despite the fact that Fulton would have liked to have more goals to give his team more of a cushion against the high-powered offense of the Blackcats, which had scored more than 100 goals this season, two would prove to be enough.
Especially with the Pirate defense which has been solid all year, allowing just 10 goals this season in 21 games. Brooklyn Moll earned her 13th shutout of the year with eight saves.
That says everything about our defense. Our only senior is Anna Gremaud who has saved our bacon more than once this season.
The Pirates (18-2-1) have a week to prepare for the Class 2 state quarterfinals on Saturday, May 28, where they will face the District 2 champion.
“We’ll take at least tomorrow off and we may work out again on Thursday,” Fulton said. “Friday is graduation, and we’ll probably take that day off as well. That gives me an opportunity to go up and watch the other district championship which is on Friday. I’ll be able to go out and find out who we’re playing and watch them play, so that’s huge for us.”