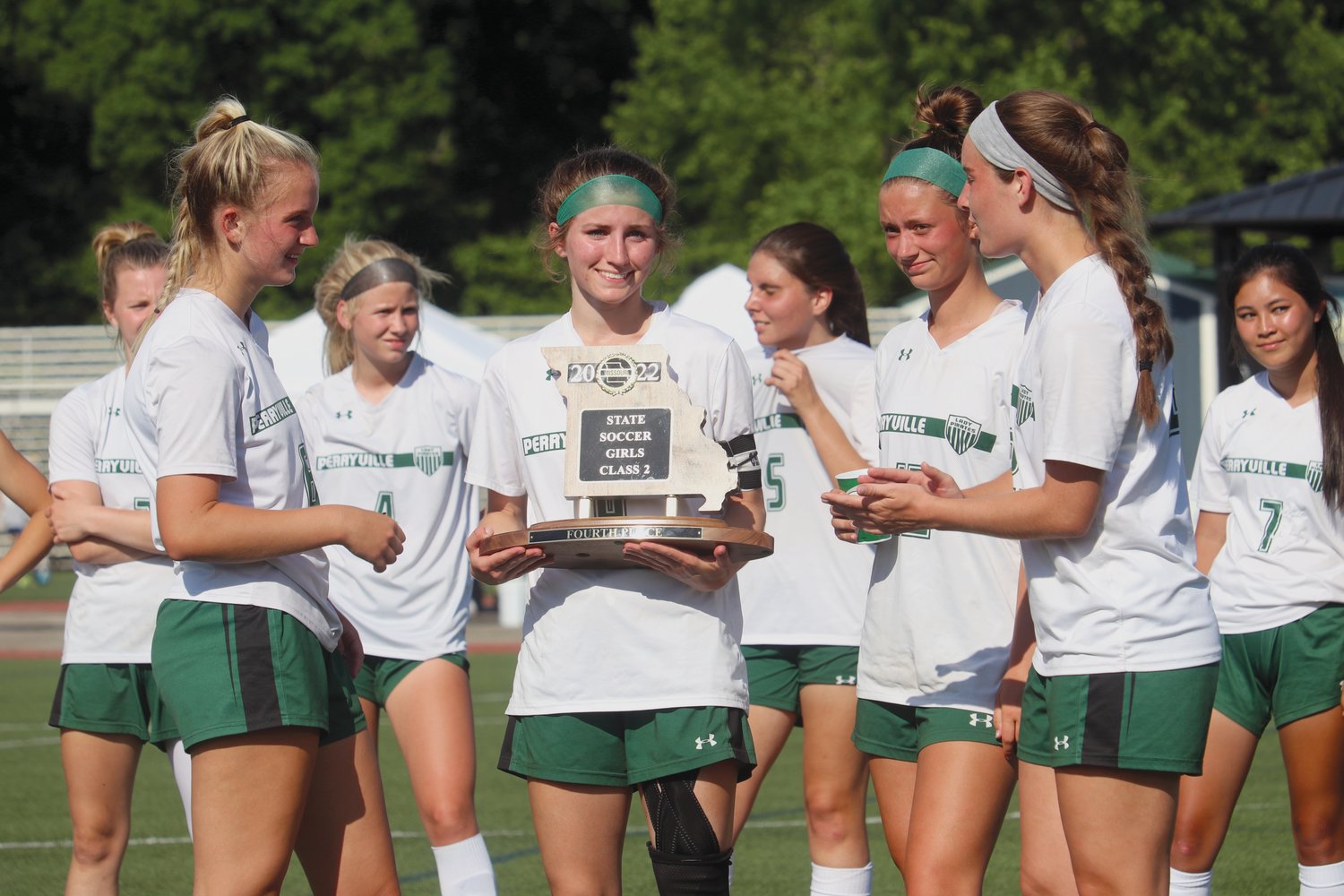 It was certainly a different experience for Perryville girls’ soccer coach Jerry Fulton and his team this past weekend at the Class 2 state tournament.
It wasn’t one that they particularly enjoyed.
Perryville fell to Pleasant Hill 2-0 in the third-place game on Saturday to claim fourth place in Class 2. In all, Perryville was outscored 6-0 in the two games, after falling to Orchard Farm 4-0 on Friday in the state semifinals. The Pirates had been shut out just twice all season before the state tournament, including a 0-0 tie against Fredericktown in the Hillsboro Tournament on April 12.
“We still came home and put something in the trophy case that had never been accomplished by the girls’ program, however unfortunately it wasn’t the one trophy that we wanted,” Fulton said. “I don’t know if it was the pressure or never being on that stage before. I‘m very still proud of what we accomplished this year and the teams we played were very good.”
That couldn’t have been any more evident when the Chicks struck early, finding the back of the net just 6:15 into the game when Chaney Gray headed in a ball assisted by Lydia Mannino. Ava Rogers would score the final goal on a rebound from a free kick that was tipped up in the air twice by Perryville sophomore goalkeeper Brooklyn Moll with 26 minutes left in the game.
Perryville played better against Pleasant Hill, than they did against Orchard Farm the day before, but Fulton still felt like something was off most of the two games. Pleasant Hill outshot Perryville 11-4.
“It felt like everything was off,” Fulton said. “Maybe it was the temperature on the turf field, but at this point we are just making excuses. We just didn’t play our best game. It was probably a mixture of both offense and defense, but if you look at the third-place game, Cloey Richardet probably had the most shots on goal and she is a defender. Which is not how we set out to play.”
It was a different experience for Fulton as well on the bench as he had been to the final four three times with the boys program, each time reaching the championship game, and winning it all in 2014.
Despite not winning, Fulton doesn’t feel like the experience was a bad one.
“Anytime you can get to the final four that is a good year,” he said. “We get almost everyone back and hopefully we can learn from this and get better in the offseason to make another run. Although there are no guarantees.”
Fulton pointed out that St. Pius and Whitfield, who finished in the top two spots in Class 1 this past weekend will most likely move into Class 2 next season based on the state’s “success factor.”
“MICDS won the championship in our class, so they will be gone most likely,” Fulton said. “One will leave and a couple will move up and other teams will get better, just like we hope to do.”
Perryville will lose Anna Gremaud, the team’s only senior, on the team’s back line. Fulton noted that she meant a lot to the program.
“She was a four-year veteran of the program and I can’t say enough good things about her,” he said. “Her speed will be greatly missed.”
Despite the setback this weekend, Fulton hopes the experience at state fuels his players this summer to want to get better.
“We will have to retool our defense a little bit and find the chemistry to get the defense back where it needs to be,” Fulton said. “Hopefully the midfield and front line will benefit from this experience and we will be hungry to get back there and show exactly what Pirate soccer can do.”