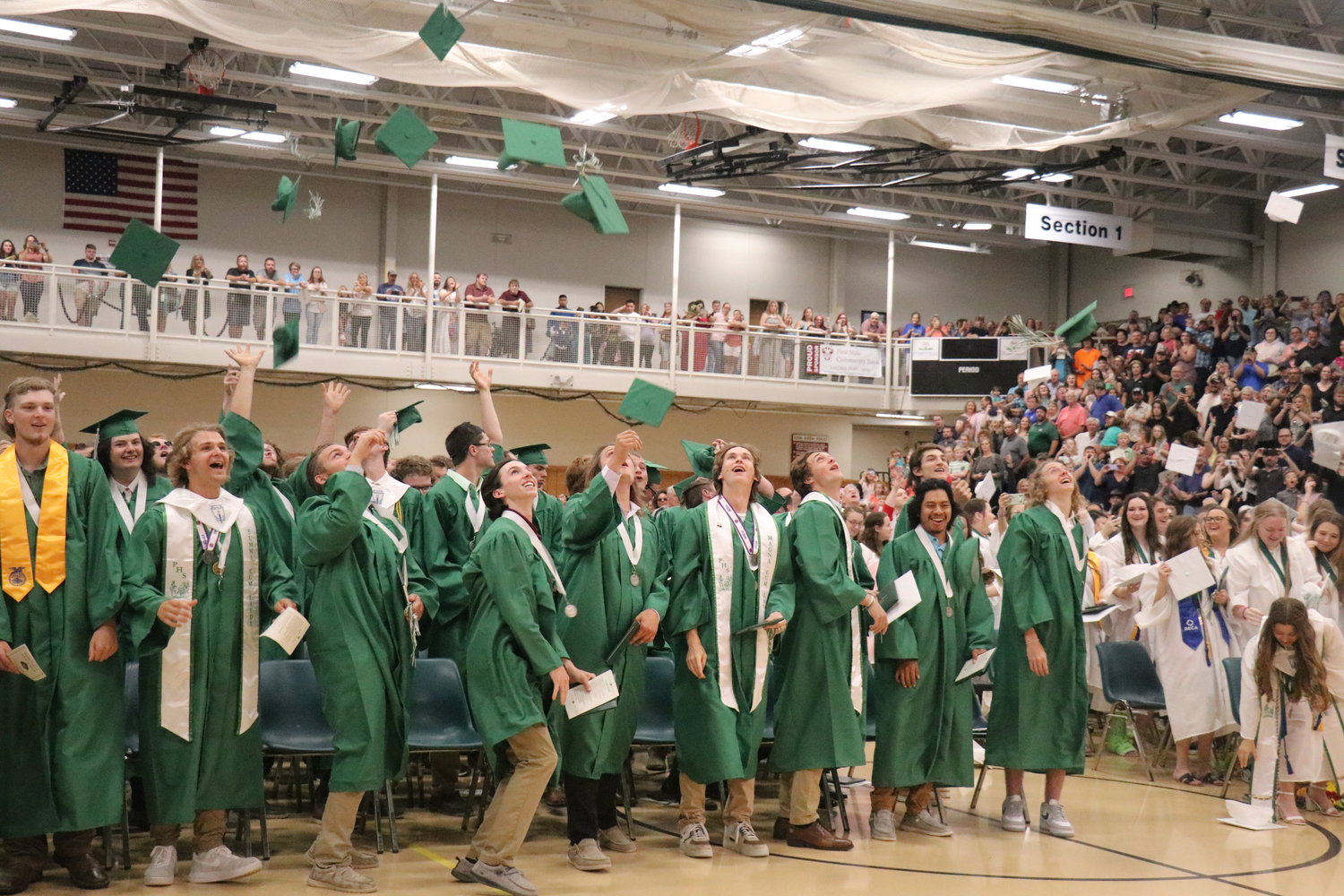 Perryville High School Principal Jeff Steffens was much like Willy Wonka from the novel “Charlie and the Chocolate Factory”, as the long-time administrator handed out diplomas like Wonka handed out golden tickets.

Unlike in the Ronald Dahl novel, where only five lucky winners found golden tickets in chocolate bars, a total of 180 Perryville High Schools walked across the stage to receive their diplomas in the annual ceremony on Friday at the Perry Park Center.

Steffens, who served as the ceremony’s commencement speaker, is retiring after 31 years within the district.

“It took you four years to complete your high school journey, while it took 31 to complete mine.” Steffens said.

The symbol of the completion of each student’s journey is a diploma which Steffens compared to Wonka’s golden tickets, after watching the Perryville Silver Dagger’s drama club perform the play earlier this year.

“My wife and I had the privilege of watching the drama club present ‘Willy Wonka and The Chocolate Factory.’  What a fantastic story it is and also an important one. Because you could say that a high school diploma is just like Willy Wonka’s famous ‘golden ticket’. It’s the chance of a lifetime. It’s what can open the doors to an incredible future. So you have to use it wisely.”

That “golden ticket” was earned through the continued education of each student throughout their four years within the walls of Perryville High School. An education that Steffens said is invaluable.

Along with Steffens, the ceremony also featured a pair of student speakers.

Senior Taegan Gerler noted that when she started high school, she once wished that high school would begin and end quickly, but now that the day had come, that she was rethinking that.

“I don’t have many regrets that I’ll leave behind as I walk across the stage in a few minutes, except for one. I regret wishing that this day would come faster. Because this time, it really is the end. We will no longer leave for summer break saying ‘see you next year,’ but instead we will say ‘good luck in your future.’ My advice to you, class of 2022 and everyone else here today, is this. Don’t forget to live in the moment. Stop wishing things away, even during the tough times. Because one day you will look back and wish you didn’t.”

Much along the same lines of Steffens, Megan Buchheit spoke about her hope that each of her classmates get the most out of their life and become whoever and whatever this want to be.

“Something I am most looking forward to in college is the chance to grow into the person I want to be,” she said. “This past summer, I was given the opportunity to attend Missouri Girls State. One of the pieces of advice I was given there, and that I have been thinking about since I left, was that I could be whoever I wanted. I didn’t know anyone there, and they didn’t know me. I firmly believe that this advice can be applied to all of us in our futures. At this point in our lives, we can have a clean slate and start new. It’s time to take control of your goals and become who you have always aspired to be.”

Steffens ended his speech with a touching thought to the class of 2022.

“Congratulations, class of 2022. It’s been an honor to work at Perry County District 32 school for the last 31 years and work with such amazing teachers, staff, students, and parents,” he said. “I’ll miss it dearly. So, as I finish writing the final pages of my story today, I wish each and every one of you the very best as you cash in your golden tickets and begin writing the rest of yours.”